Well, we’re barely in to February and it’s all ready been a crazy 2018 for us! On January 23, my life changed forever! I remember standing in the bathroom, shaking, researching on my phone whether or not you could have a false positive on a pregnancy test…nope, you can’t! I looked at that faint positive band in amazement and thanksgiving! God had finally blessed me with the one thing I had prayed for over the last year and a half! I was in shock, as I spent the evening before with my discipleship mentor telling her how I knew for certain I wasn’t pregnant, even though I was several days late. God sure has a sense of humor! I’m sure He was up there laughing saying, “Ha, Maren, if only you knew what you’d find out tomorrow! Never say never. Well, congratulations, Maren, you’re pregnant!” I was so overjoyed! I spent that entire week praying and thanking God for the immeasurable blessing He had just given to me. I prayed for that little baby’s health and future salvation repeatedly. I couldn’t wait to be a mother!!! 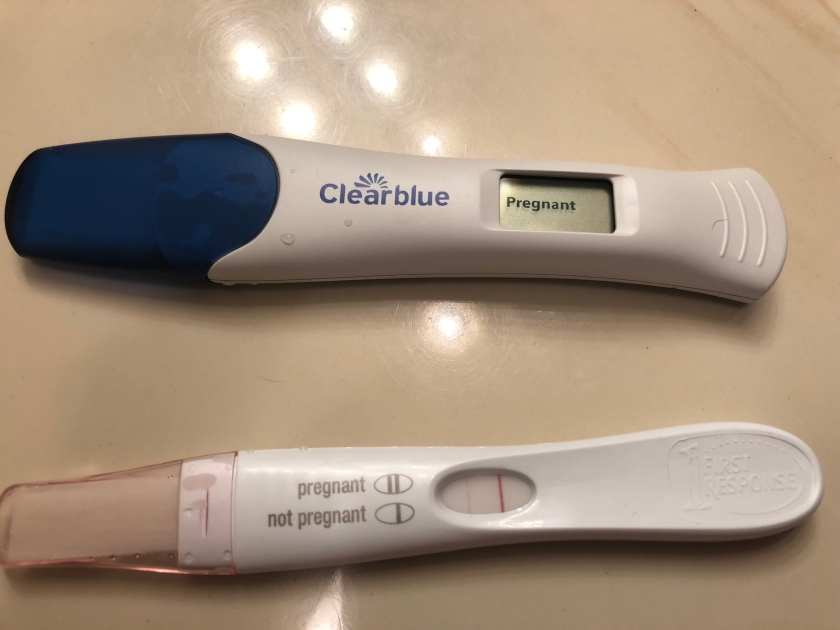 Little did I know that one week later, that joy, excitement, thanksgiving and happiness would soon come crashing down. Two days before my 6 week mark, I had a miscarriage. It all started on that Sunday after church. I was having lunch with Zach when I started cramping a lot more severely then I had previously. It was enough to cause me concern. After calling a 24 hour triage nurse, she recommended that I head to the ER for further testing. At the ER, I had multiple ultrasounds, a pelvic exam and blood drawn and the results were inconclusive. Basically, one of three things could be the issue: I had already miscarried, I am having an ectopic pregnancy or I have a completely viable pregnancy but it was too early to tell on the ultrasound. Zach and I left that evening with more questions than we had going into the ER. We were told to return in 48 hours to get my blood drawn to check my beta hCG levels, but I knew before that 48 hours came that I would never get to meet my little baby. The bleeding continued to get worse and worse. I knew it was over! I had lost my baby. The emotional pain was excruciating. The thing I had prayed for and desired so deeply for so long came and was taken in the blink of an eye.

That week was a blur, full of tears and sadness, but I made a choice that week to allow this experience to grow me, challenge me, make me stronger and to use it for good. I definitely learned more through the trial of miscarriage then I ever did in my year and a half of waiting on a pregnancy. So, today, I share with you the things I’ve learned through this and hopefully it will help one of you who has struggled with this or will struggle with this in the future.

1. We can get pregnant!
Over the last year and a half, I worried and doubted that Zach and I would be able to conceive. Zach kept trusting that God had a plan and that it was in His timing and not ours, but I doubted. I started to wonder if there was something wrong with one of us. Zach told me to stop tracking my cycle and to stop taking ovulation kits. So, I stopped tracking, but the entire time I felt like I was stuck in a hole I couldn’t get out of. I felt like I needed to be proactive and taking steps toward the end goal of getting pregnant. So, I scheduled a doctor’s appointment with a fertility specialist. A week before my appointment is when I found out I was pregnant! God made it clear that we can get pregnant without the help of a fertility specialist and that it would be in HIS TIMING. I’m trying to hold on to this truth until we get pregnant again.

2. God is still good.
Despite going through a loss or a painful situation of any kind, always remember that God is still good. I had to remind myself of this over and over again. No matter what would happen, God was in control and nothing would happen that He didn’t all ready know about or have control over. He is righteous and All-knowing. Even though this experience has made me question a lot of things, I have no doubt that this will be used for God’s glory and He intends this to be used for the furthering of His Kingdom. God is still good and He wants what is best for me!

3. Believe Biblical truth and not your emotions.
I’m a “feeler.” For those of you that have no idea what I’m talking about, it means that I process things based on my emotions instead of logically. I spent so many of my younger years leading by the way I felt instead of trusting biblical truth. It wasn’t until I began to grow in my faith that I learned that emotions lie. God gave us emotions, however, we were meant to be able to control emotions instead of our emotions controlling us. During this experience, I’ve so wanted to wallow in my sadness and pity and anger but the devil uses my emotions to pull me away from God. It’s normal for us to mourn and grieve, but when those feelings turn into anger or jealousy, that’s when I need to check myself at the door and remember that those emotions can lead to sin.

4. Cleave to your husband in times of sadness.
This experience definitely brought Zach and I closer in a way only someone who’s gone through a loss can understand. Going through this experience has allowed us to draw nearer to God, mourn together and to learn how to be sensitive to each other while we’re hurting. We understand each other better now than we did before and I’m thankful that we have been able to be there for each other in this time.

5. Rejoice with those who rejoice, mourn with those who mourn.
This is probably THE toughest lesson I’m learning and I definitely haven’t mastered it yet. I’ve always struggled with jealousy and this season of life has shown me how sinful my heart truly is and how much I need Christ because of it. This season has been even more difficult for me because almost all of my closest friends have gotten pregnant so I’m constantly surrounded by the reminder of how I’m not pregnant. Romans 12:15 says, “rejoice with those who rejoice and mourn with those who mourn.” That verse has been a hard pill for me to swallow because my struggle with jealousy has embarrassingly taken over while seeing other girls get what I so desire. I’m learning that I have to change my perspective by rejoicing with them in their pregnancies instead of mourning because they’re pregnant. Just because I’m not pregnant right now doesn’t mean that my life isn’t as important as my friends’ who are pregnant. God has different plans for me and though that’s hard for me to understand, I’m thankful that He’s providing the miracle of pregnancy to my friends who have prayed for this as well. I’m really working on 100% whole-heartedly rejoicing with them and praying that my heart continues to change in that regard.

6. God is not done with you. He is refining you.
James 1:2-3 “Count it all joy, brothers when you meet trials of various kinds for you know the testing of your faith produces steadfastness.”
I should count this experience as a joy and a blessing because God counts me as worthy to suffer for His namesake. In the middle of this struggle, it’s hard to understand why God would allow this to happen, but like a parent disciplines a child, God does it to refine me and draw me nearer to Himself. I’m learning to embrace the pain and suffering I’m enduring because God is worth it! Every trial I face allows me the opportunity to be one step closer to Christ.

7. Let go of your plans and trust His.
The other week I listened to a podcast of Chuck Swindoll preaching on Abraham and Isaac in Genesis 22. The premise of the sermon was that even though God told Abraham to sacrifice his only promised son, Isaac, Abraham trusted God and His plans. Abraham knew that God would fulfill His promise of making his offspring as numerous as the stars in the sky and that God would provide him something other than Isaac to sacrifice. Even though Abraham wasn’t sure what God’s plans looked like, he trusted God above all else and was willing to even sacrifice his only son because he feared God most. I’m not sure exactly why I had to lose my baby, but I’m learning to let go of my plans and my ideas of what my life should look like and to just trust God. God’s plans are infinitely better than my own and I know that He will provide a life for me that is better than I could ever imagine if I just allow Him to lead me. I’m hopeful that Zach and I will get pregnant again and that God will one day answer our prayers of having a family! I just need to let go of my own plans and trust His.